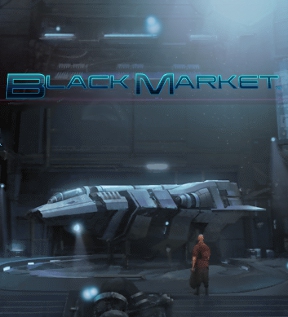 ). Inspired by the likes of Elite, gameplay revolves around space combat and commodity trading, as the player slowly builds a fortune to spend on bigger guns and better ships.

The game also features a sizable campaign, which tells the story of Vincent Wake- a man with no memory, no hair, and a talking eyepatch. Guided by the incredibly untrustworthy ghost of a former trader and general pervert named Hardgrove, Vincent find himself swept into the conflict between an ambitious Megacorporation, a hostile Confederation, and a very angry robot. Things in the Galali system are about to take a turn for the worse.

Why? The answer lies with the mysterious force that calls itself the Market...

The Flash version has long since been removed, and the Flash games by Big Block Games had site locking so they could not be put onto other websites. However, the high-definition PC version is still available for purchase on GamersGate