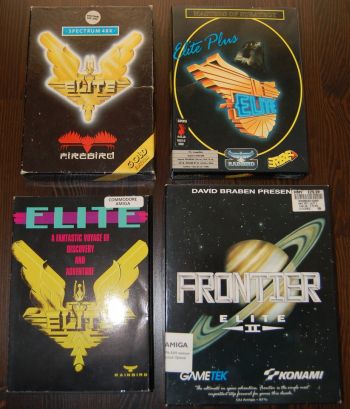 Elite is a famous, popular (it eventually sold one copy of the BBC Micro version for every BBC Micro in the world at the timenote which is remarkable, considering that a large percentage of these devices were owned by schools and, in theory, were only supposed to run educational or edutainment software) and historically significant game, one of the earliest in the Wide-Open Sandbox genre. It was written by David Braben and Ian Bell, and first released in 1984 for the BBC Micro and Acorn Electron. In the game you start on Lave Station with 100 credits and a lightly armed trading ship, a Cobra Mark III. From here you seek fame, fortune and money via one of the many, many, different options open to you. You can:

The name derives from the exalted highest combat ranking a pilot can have. Many aspects of the game make it rather hard: there are no lives, save perhaps the painfully expensive escape pods, not all of the systems are friendly (some are run by pirates, what a pity they tend to have nice stuff to buy), while you can upgrade it a lot you can never sell your Cobra Mark III and a warship it ain't and then there is docking at space stations...

The game uses very realistic physics for the time, Space Is Most Certainly NOT An Ocean and really pushed the capabilities of the computers it was released on (which eventually became most of them). Many first time players made the error of treating it like a Shoot 'Em Up, resulting in death (especially seeing as the first big shootable thing is the space station you just left, and the police tend to object to that).

One of the most amazing things is the sheer size of the game for an 8-bit computer. By using procedural generation the game manages to have 2048 different, predetermined and constant systems to visit across eight galaxies. (This did lead to a few issues, several planets can only be reached by inter-galactic hyperspace because they are too far from the other planets in the galaxy to jump to normally and intergalactic jumps are not cheap. Also the designers had to tweak the algorithm several times when a planet got a profane name via the generation method.)

Elite was one of the first home computer games to use wireframe 3D graphics with hidden line removal (also making it among the first ever true 3D games to be released). Another novelty was the inclusion of The Dark Wheel, a novella by Robert Holdstock which influenced new players with insight into the moral and legal codes which they might aspire to* and also started several very pesistent rumours.

Frontier: Elite II and Frontier: First Encounters are later PC sequels by David Braben alone (the original authors having had a serious falling-out), with textured 3D graphics. Sadly, while First Encounters has good Newtonian physics (it was even possible to place a ship into proper orbit), it was an Obvious Beta. Various indie developers have hacked and modified the code to make it playable on modern systems, even going so far as to port the graphics engine to Open GL. One ambitious project, FFE-D3D, aims to rewrite the entire game with greatly improved graphics. The fourth game in the series, Elite Dangerous, was released for Windows on 16 December 2014, featuring an online persistent universe with multiplayer elements, with a Mac OSX port and other updates slated for the near future.

The game was eventually credited for launching an entire sub-genre of videogames known as "Elite-like", with entries including EVE Online, Freelancer, Jumpgate, Infinity: The Quest for Earth, Wing Commander: Privateer, No Man's Sky, the Escape Velocity series, open-source game Vega Strike (which got an "Elite Strike" mod, but its development currently seems to be frozen), and the X-Universe series of space combat and trading games. There is now also a free, open-source remake, Oolite (so named because it uses object-oriented programming), which has a fairly dedicated modding community.