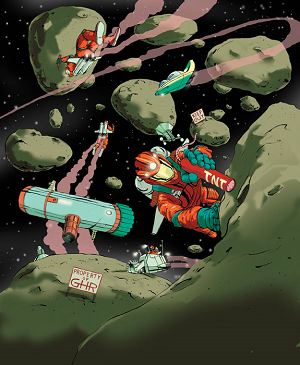 "Yes, there's no safer occupation than mining. Especially when you're perched on a snowball whipping through space at a million miles an hour!"
— Futurama
Advertisement:

Spectrographic analysis of the asteroids in Earth's solar system show that there's tons of mineral wealth just floating out there waiting for some daring Prospector with a rocket, a spacesuit, and a drill to go get it. Creators of science fiction thus came up with the image of the Belters (also known as Rock Rats, Rockskippers, and so on) as rugged, independent types who prefer the freedom of a one-man spaceship and a life of hard work to living under someone else's rules.

It should also be noted that asteroid mining is one of the things that make Alien Invasions somewhat inefficient. It's much easier to pull materials and resources from a low-gravity asteroid than the huge gravity well of a planet. Not to mention not having to deal with the indigenous population.

Stories that feature miners IN SPACE! draw a lot of inspiration from (and sometimes directly steal from) stories regarding the various gold and silver rushes of the 1800s. A notable aspect of this is that, since space is essentially infinite from a human perspective, the main factor that ended the historic gold rushes — that, eventually, the frontier closes and you run out of easily available deposits to prospect — isn't a factor for asteroid miners. When your local areas become played out and frontiersman mining is no longer viable, you can always move to another star system and start over.

Often they will end up processing their ore in a Mobile Factory. Can be difficult if they work in an Asteroid Thicket.

Not to be confused with Space Mines or Spice Mines.