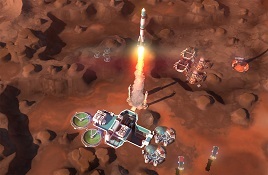 Offworld shipment launched...look at all the money!
Save Humanity. Turn a Profit. Preferably Both.
Advertisement:

Offworld Trading Company is a 2015 Real-Time Strategy game created by Mohawk Games and published by Stardock Entertainment. Players assume the role of competing companies colonizing Mars, with the goal of conquering the other companies...with a catch. There are no military units, and no killing. Only economic victory is possible. Players capture tiles, extract resources, and perform trade in an entirely player driven market. No player can have every resource they need to expand their colony, yet every resource is always available in the market, with prices rising and falling depending on player behavior. Yet not all is total pacifism in Offworld. Players can access a Black Market to purchase methods of sabotage opponents' resource production, steal resources, or even hack the resource market to produce artificial resource surpluses and shortages.

Winning the game requires planning, strategy, and deception. Players conquer opponents by using massive amounts of money to buy out their opponents' stock, in which they will receive all their assets, resources, and debt.