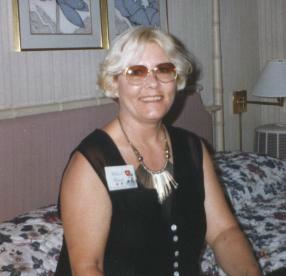 Melisa Michaels (May 31, 1946 – August 30, 2019), sometimes Melisa C. Michaels, was an American author of Speculative Fiction and Mystery Fiction. And yes, her first name is spelled with one 'l'.

She is best known for her Skyrider series about a two-fisted Action Girl space pilot in the Asteroid Belt, the first novel of which was nominated for a Locus Award. She also wrote the Rosie Lavine Urban Fantasy/Detective series; a "straight" mystery novel, Through the Eyes of the Dead; and a couple of other Science Fiction novels.

She originally chose "Michaels" as a pen name to honor several important men named Michael in her life (including fellow author, Michael Kurland). In an amusing real-life twist, she ended up marrying a man whose last name was Michaels.

In addition to her writing, Michaels served as the Webmistress for the Science Fiction Writers of America for many years, for which work she received a special Nebula Award in 2007, along with Graham P. Collins.

Tropes in Melisa Michaels' works include: