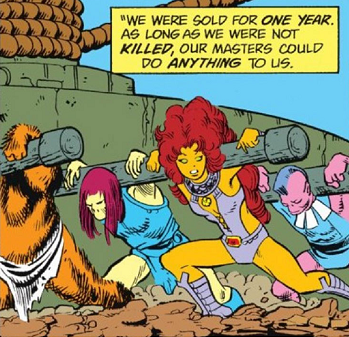 "Kehmor is my name. I am the slavemaster of Lord Ruerl, and that is all you pitiful wretches need to know of me. Gone are the days when your lives were made complex by the choices that freedom allowed you. Your life will be simple now: obey me or die."
—Warhammer: Dark Elves Army Book (6th Edition)
Advertisement:

The main character ends up a slave at some point in the story. It doesn't necessarily stick.

There is often a scene in which the character is sold in the Slave Market, showcasing all the evils of slavery; the protagonist will witness how families are torn apart, will have to undress and be examined like an animal, and will perhaps be beaten. (Artists are particulary fond of the undress and be examined stage, for some reason. Especially for young women.) If he looks strong, he will be told that he will go to the galleys or the mines — a Fate Worse than Death — or perhaps to the Gladiator Games. If she (or occasionally he) is attractive, she will be told that she will make a buyer very happy indeed...

If they're lucky, slaves will be bought for a certain skill or craft they possess. If they're really lucky, they will be bought by someone who intends to set them free when no one is looking.note Or maybe when everyone is looking; for example, Islam classes freeing slaves as a virtuous act, without actually prohibiting slavery, so this might be a display of conspicuous virtue in an old-time Muslim society. If they're unlucky, they'll be bought by someone who works his slaves to death or by a lecher or end up as gladiators.

If the character is female, this trope will probably lead to Go-Go Enslavement.

The Back Story of many if not most slave major characters; very few are Born into Slavery, and most have a Secret Legacy of Blue Blood or Royal Blood. When a sorcerer or a supernatural entity forces the protagonist into servitude, the trope overlaps with Muggle in Mage Custody.

Because We Will Use Manual Labor in the Future, this can occur even in futuristic scenarios. When it's done to an entire race, see Slave Race. They may be used as Slave Mooks or Sympathetic Sentient Weapons or be the target of Superhuman Trafficking as well. Can lead to Give Me Liberty or Give Me Death! or even I Die Free or Happiness in Slavery. Indentured Servitude is a specific form. When done as a form of punishment for wrongdoing, see Prisoner's Work and Working on the Chain Gang.