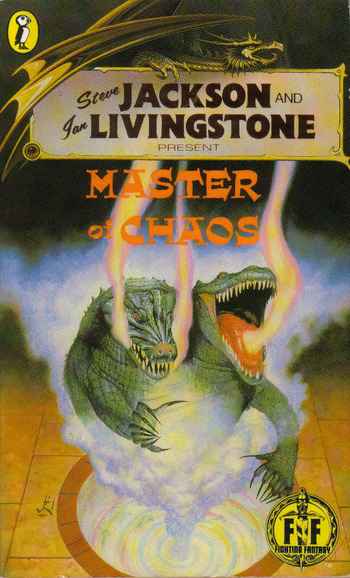 Master of Chaos is the 41st entry in the Fighting Fantasy series of gamebooks, written by Keith Martin.

You are a famous warrior and resourceful adventurer, hired by a council of wizards in order to undertake a dangerous mission: the Staff of Rulership they kept was stolen by a powerful sorcerer using a dreaded "Astral Slayer" to retrieve it. Furthermore, the scrying reveal that the culprit is the infamous Master of Chaos Shanzikuul, an immoral warlock aligned with the forces of evil who was gruesomely killed three hundred years ago, and yet has returned from the dead to assemble an army of chaotic mutations with the powers of the Staff of Rulership. Of course, he must be stopped at all costs. However, this will mean travel to the lost city of Kabesh, in the wildlands of Kush, and the only way to reach it is to sail to the port city of Ashkyos. You will have to travel undercover on the ship of the ferocious pirate Shagrot, escape once you arrive in Ashkyos and from there make preparations for your dangerous journey to the ruins of Kabesh, where the Master of Chaos awaits you.

Master of Chaos is slightly different from Martin's other books, featuring a pool of special, rogueish "Skills" for you to choose from, kinda like Sword of the Samurai and Dead of Night. The story is divided in several stages, some of which involves free exploration when you're in Ahskyos or in the ruins of Kabesh. For the former, you're given a score of Notoriety: if you make a ruckus with criminal acts such as fighting or theft, your Notoriety will rise. If you become too infamous you will have to leave Ashkyos and head for Kabesh, ready or not. Furthermore, you're not the only one interested in recovering the Staff of Rulership...

Master of Chaos provides examples of: