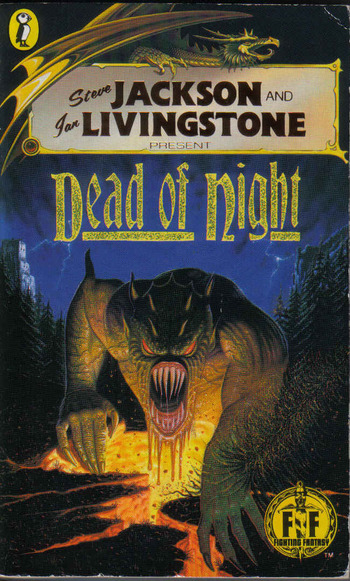 Dead of Night is the 40th entry of the Fighting Fantasy series of gamebooks, written by Jim Bambra and Stephen Hand.

This time, you are a Templar, a brave knight of a valiant order who fights the forces of evil in the world of Titan. Since your younger brother was killed by a demonic force, you dedicated your life to this battle, slaying many demons and living dead with your faithful sword and your silver cross, gaining fame as the "Demon-Stalker" but also enemies. Among them, the terrible Snake Demon Myurr himself took notice of your demon-slaying skills and took up measures. One night, you dream of Myurr threatening your own parents in your home village of Crowford. Wasting no time, you ride towards your home village, to start a long, treacherous quest across haunted forests, cursed villages and eldricht locations to stop Myurr's latest plans of conquest and save your parents.

Dead of Night is considered among the best gamebooks of the Fighting Fantasy: it has a great, gothic-horror atmosphere, well-written and memorable characters and encounters as well as multiple paths to victory. The gameplay features the presence of Talents you can use on your quest to survive certain obstacles, kinda like the Kai powers from Lone Wolf. It also has a Karma Meter in the form of Evil points, as performing certain actions will rise this score, which may make things harder for you.

Stephen Hand later wrote two more books with a similar style, namely Legend of the Shadow Warriors and Moonrunner. Do not confuse with Dead of Night or the Dead of Night.

Dead of Night provides examples of: