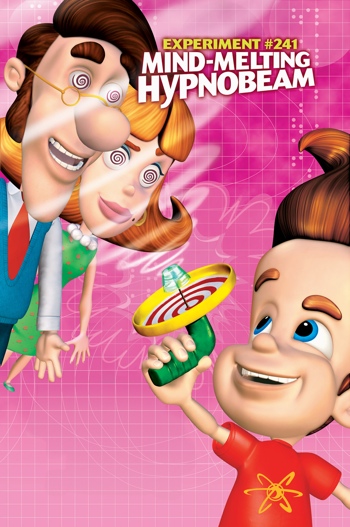 The iris deformation ray is working!
"She looks hypnotized! He must have used that joy buzzer on her!"
— Paul, Dinosaucers
Advertisement:

A standard gadget in the Mad Scientist grab bag. The Hypno Ray allows the user to instantly hypnotize an unsuspecting target and make that person do their evil bidding.

Often a Ray Gun, but the magical version usually takes the form of Eye Beams.

The sequence follows a standard progression:

The victim later hears the trigger and takes the action, no matter how inappropriate it may be at the time.

This can often be combined with a mass media event to Take Over the World.

These days, this type of device is usually limited to comedic settings.

A Sub-Trope of Mind-Control Device.

Not to be confused with Hypnotic Eyes.

Jimmy hypnotizes his parents with an invention of his, into thinking it's his birthday.

Jimmy hypnotizes his parents with an invention of his, into thinking it's his birthday.