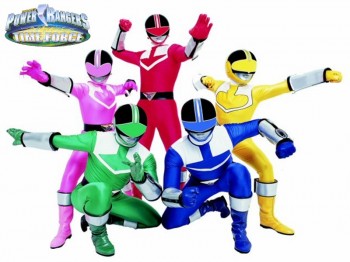 Season 9 of Power Rangers, adapted from Mirai Sentai Timeranger. In the year 3000, crime is almost a memory, as Time Force has captured almost every criminal. The only one left is the mutant Ransik. Time Force Red Ranger Alex and his squad finally manage to capture him, and Alex takes the opportunity to propose to his girlfriend and subordinate, Jen. Before they can fully realize their dreams of wedded bliss, however, Ransik's spoiled daughter, Nadira, breaks him out and Alex is apparently killed in the crossfire. Ransik and Nadira go on to take the cryogenically frozen mutants from prison and hightail it back to the year 2001, before there was a Time Force to stop them.

Taking responsibility for the fact that they got away on her watch, a brokenhearted Jen collects the morphers and her squad, and journeys a thousand years into the past to avenge her fiance. Unfortunately, Alex's DNA is needed to unlock the morphers, but there just so happens to be an ancestor of him living in Silver Hills, Washington at the turn of the millennium. What are the odds?

Wes Collins, once convinced they're not crazy, joins the Time Force Rangers, helping them in their fight and to adjust to being so far from home. Eventually, it turns out that the future in Millennium City isn't as rosy as one would expect, and either destiny will be screwed, or Wes will.

Easily one of the darkest seasons of Power Rangers, it takes a lot from its Super Sentai counterpart (despite seasons of PR that do so normally being disliked, such as Wild Force and Samurai, this season is a rare exception). Of particular note is being the first Power Rangers series to actually acknowledge the death of a character, though Alex gets better towards the end of the series. Also of note is the fact that the leader of the team is the Pink Ranger, Action Girl Jen (although because of the source footage Red is still in the forefront, with him and the Sixth Ranger getting nearly every Limit Break and Super Mode through the season).

And while the acting in Power Rangers has never been any more than serviceable, the performances from the two leads Jason Faunt and Erin Cahill (as well as several others) were actually quite strong. The darker nature of the season helps to highlight that talent with themes of lost loved ones, prejudice, revenge, new love and redemption. This is also the only Power Rangers series, to date, to be nominated for an Emmy. It was for sound editing

Time Force is well-loved and quite popular among fans, and is often regarded as one of the best seasons. Excellent performances, mature themes, a dynamic story, and unique relationships among the main characters (particular Wes and Eric) are all cited as strong points.

Time Force is noteworthy for being the final Power Rangers installment produced by Saban Entertainment before Disney bought the franchise in late 2001. As such, it was succeeded by Power Rangers Wild Force, which was the first one produced by Disney.

It was also the last season to be aired in full by Fox Kids, which would be replaced by Fox Box the following year.

In 2017, it received an official Tabletop RPG sequel entitled Power Rangers Hyperforce, with Erin Cahill reprising as Jen Scotts in the first episode.