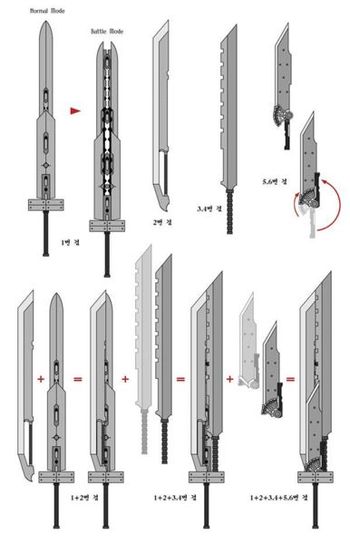 Some assembly required.
"You're holding them all wrong. Keep in mind; these are dual swords. Two halves of a single weapon. Don't think of them as separate, because they're not. They're just two different parts of the same whole."
— Zuko, Avatar: The Last Airbender
Advertisement:

Two weapons are always better than one, but they're awfully heavy to lug around separately. So what's the solution? Rig them to be able to combine as one, that's what! Often used to show that a normally singular-weaponed warrior can actually dual wield, the Bifurcated Weapon is two weapons in one. Weapons permanently stuck together, like gunblades, are not bifurcated, as they can't break apart through normal means.

The theory behind this is that while you can get more range out of two separate weapons, combining them into one mega-weapon should increase your battle prowess enough to finish off your foe. Most of the time, though, the weapon to be bifurcated is a sword, and it's usually rigged...to split right down the middle, making two mirror images of one sword, making one wonder why it was even joined in the first place. Staves are usually more logical as far as close-combat weaponry is concerned, as the long rod can be broken down into two smaller sticks to handle a more cramped area. And, of course, using this tactic with guns is a no-brainer, but watch out for the increased power/ammo consumption.

A different theory is that these weapons provide the wielder with a strategic advantage by making one's opponent become used to fighting a person wielding one weapon and then suddenly attacking with two, the sudden switch in technique being enough to throw off the enemy's balance, allowing the wielder to obtain victory. Doing so also shows that it's a versatile weapon, wielded by a trained, versatile person.

For the most part, these weapons are confined to fiction for a number of Awesome, but Impractical reasons. Some examples do exist in the real world, though generally not to the extent seen in fiction. One of the more well-known real-world examples is the bayonetted rifle: Separately, they're a knife and rifle that can be used as such, but by combining them the rifle grants the blade additional reach. A more modern example would be the underbarrel weapons, typically either a grenade launcher or shotgun, which can sometimes be detached from the primary barrel for use as an autonomous weapon.

For another many-weapons-in-one-package deal, see the Morph Weapon or Swiss Army Weapon, weapons that can change from one form to another, or Mix-and-Match Weapon, weapons made of two different weapons, bearing uses of both. Compare Scaramanga Special, weapons that can be disassembled into some innocuous objects as a means of concealment, and Combo Rifle, when guns can combine into one. Not to be confused with a sword that bifurcates other things. Certain Double Weapons also tend to crossover with this trope, although most examples are of the mundane variety where somewhere in the middle of the double-ended weapon's handle, it can detach and allow Dual Wielding.