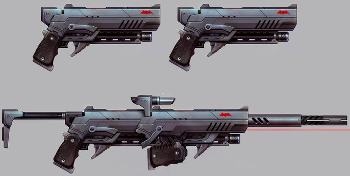 Guns Akimbo is cool. Rifles and shotguns are cool. What could be better than combining them, in the form of handguns that can connect together to form a rifle or shotgun? You can combine your favorite gun tropes together without having to deal with the logistics of a character carrying both types of weapons separately. This also lets a character cover multiple tactical options with much fewer weapons, like handguns for a traditional shootout that can combine into a sniper rifle for long-range engagements.
Advertisement:

Sure, Fridge Logic would have you know that Guns Do Not Work That Way: just think of all the firing mechanisms of the forward gun that would somehow have to get out of the way for a bullet fired from the back gun to travel down the barrels of both at once, not to mention the pressure of the firing would likely erupt from where the two barrels connect, which would almost certainly damage the weapon. But, it definitely qualifies for Rule of Cool so these problems may not be a concern.

Compare Bifurcated Weapon, Gun Accessories, IKEA Weaponry and Swiss Army Gun. Can be justified if the guns in question are Energy Weapons or Magnetic Weapons.