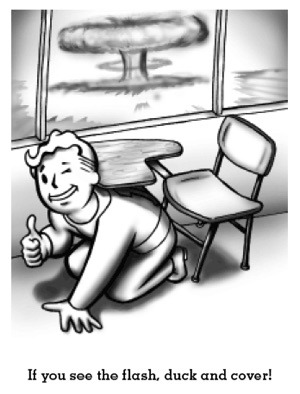 Concealment and cover are two totally different things. Yet Hollywood seems to get the two mixed up.

Hollywood seems to apply this trope most egregiously to both car doors and flipped-over furniture. Car doors are designed to minimize weight and maximize protection against car crashes, and are thus mostly made from plastic with a thin metal plate on the outside; these materials do not, in fact, provide much protection against bullets. Other than police cars and armored cars for VIP protection, which have been specially designed to withstand the impact, there isn't a car on the market whose doors could stop even modern pistol fire. The prevalence of cars providing cover in a gunfight in fiction is probably a result of shootouts in the 1920s, when cars (including the doors) were made entirely of steel and most handguns fired subsonic ammunition. Even then a car provided much less protection against rifle shots, but Hollywood has always had a problem understanding the fact that rifles are much more powerful than pistols.

Flipped-over furniture, particularly large tables, is another object that Hollywood tends to treat as a bulletproof shield for protagonists, villains, and mooks alike, despite that being among some of the worst cover you could possibly choose from. More egregiously, when the overturned table does get hit with a barrage of bullets from a handgun, or a light machine gun, the only damage said gun does to the table is splintering the table at places where the shots would land, and leaving the table ruined forever because of it, yet the person hiding behind the table is no worse for wear. In real life, even relatively low calibre bullets will pierce a table because...well, it's a wooden table. Wood is well known for its sturdiness, which is why most furniture is made out of it, but it isn't all that strong of a material, especially when it comes to stopping a bullet. Basically, if a work is set before the 1900's, then tables will actually provide some decent cover due to the prevalence of sub-sonic ammunition. Otherwise, all bets are off.

The trope also applies to buildings, however. A bullet will generally be expected to manage 12 inches of penetration in ballistic gel to be considered a useful defense load, and this will generally allow it to penetrate any interior walls of an average American home. Even special frangible rounds are only designed to be stopped by the heavier brick exterior walls so they don't exit the building and hit random passers by.

This trope is powered by the Rule of Perception; if you can't see it, you can't hit it. Of course, it's true that it's harder to hit something you can't see, simply because you can't be sure where it is; this trope is about anything opaque being effectively bulletproof. In reality, the only good concealment does is if it is so total the shooter does not know you are there and only then if it is long enough for him/her to move on, for you to ready and use your own weapon, or for you to escape without being seen before you're out of range. Though if you have nothing better that qualifies as actual cover, getting as much mass (of any form from a building wall to a vehicle's engine block) between you and the shooter might turn what would be a fatal wound into a survivable one instead—especially with a lower-caliber bullet or weaker firearm, or it can make it harder for an inexperienced shooter not armed with an automatic weapon to properly aim for a fatal shot. (For example, running into a building won't do a thing for you against someone armed with an Uzi or AK/AR weapon, but it may well save your life against someone with a shotgun or some handguns, especially the further inside you run and the further away the shooter is—one wall between is concealment, two or three or four thick walls is solid cover depending on the weapon and the distance of the shooter.)

This can be considered an Acceptable Break From Reality in video games with cover systems, since it would be frustrating to get into what appeared to be cover only to find the enemy could still hit you just fine. Players tend to only object when things no reasonable person would try to hide behind like ordinary glass or picket fences are still totally bulletproof, or the cover system is inconsistent and unclear to use. It tends to be more of a problem when enemies can take cover in places that blatantly aren't cover, such as being protected from a hand grenade by hiding behind a rack of magazines or handrail.

This is common enough that only aversions, subversions and justified cases should be listed. Contrast with The All-Seeing A.I., where cover doesn't equal concealment.

This trope has been tested by the Mythbusters. Whether this trope is busted or plausible depends on what the concealment is made of and what is hidden inside the concealment. It's mostly busted for walls vs. bullets.

Also see Bulletproof Human Shield, when bodies are used for cover, and Bombproof Appliance or Improbable Cover, for when tissue-paper stops explosions. If the bullet is stopped by some small object on the hero's person, that's Pocket Protector. Contrast Bullethole Door, where bullets are usually more effective than they really should be; having both tropes in the same work is a great way to induce Fridge Logic.

The Japan Safety and Promotion Company team in Chicago flips a diner table and use it as a shield after coming under attack by Thorne Mafia soldiers with Beretta PM12S submachine guns. It's "surprisingly effective".

The Japan Safety and Promotion Company team in Chicago flips a diner table and use it as a shield after coming under attack by Thorne Mafia soldiers with Beretta PM12S submachine guns. It's "surprisingly effective".