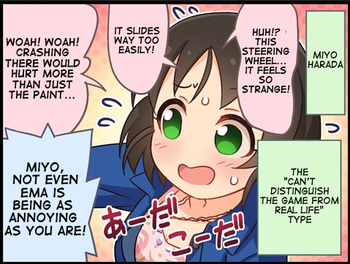 How hard can it be?
"I've been playing guitar for fourteen years, so it's actually less than I've been playing video games. I had a go on the Guitar Hero III earlier, and I don't really want to tell you the result I got." note He failed on Hard at 2%, which is about 10 seconds into the song.
— Herman Li,

(on playing "Through the Fire and Flames" on Guitar Hero III: Legends of Rock), DragonForce
Advertisement:

When someone does something in a video game they, of course, become an expert at it in real life. If you know Mortal Kombat, then you can mop the floor with even the most seasoned fighters after practicing on your Murder Simulators (or so the Moral Guardians say) and if you watch MacGyver you can get right to work on Homemade Inventions.

However, when you already have the talent in question and try to play the game, you may find that you don't really know how. A lethal fighter gets tripped up on the controls, or a pro guitarist can't handle the simplified button-pushing. Maybe Reality Is Unrealistic, or perhaps it's because you're the skill equivalent of a Straw Vulcan and cannot accept a version that's been simplified for the Rule of Fun. Either way, you have no choice but to admit, "I don't know Mortal Kombat." If you won't admit it, you might just be one of those "Stop Having Fun" Guys, instead.