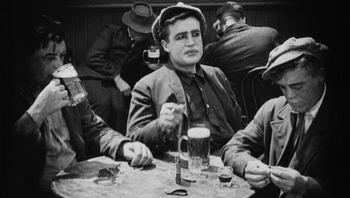 Regeneration is a 1915 film directed by Raoul Walsh.

Owen Conway is orphaned at the age of 10, growing up in the grinding poverty of New York's slums. With no other way out of his situation, he becomes a criminal, and the leader of an Irish mob gang. However, he clearly still has a moral conscience, like when he protects a physically deformed friend of his from bullies.

Into his life comes Marie Deering, a privileged society lady who meets Owen when her admirer, District Attorney Ames, takes her on a visit to the slums. Marie is so shaken by the crime and poverty that she sees that she throws herself into charity work, starting a mission in Owen's neighborhood. Owen and Marie fall in love, much to the disgust of DA Ames, and Owen leaves his criminal past behind—but his criminal acquaintances aren't as willing to leave him behind.

Raoul Walsh was a protege of D. W. Griffith. Walsh embarked on this project after finishing work on Griffith's The Birth of a Nation, for which he was an assistant director as well as an actor playing John Wilkes Booth. Regeneration owes an obvious debt to Griffith's 1912 short film The Musketeers of Pig Alley, another film about Irish gangsters in the crime-ridden New York slums.