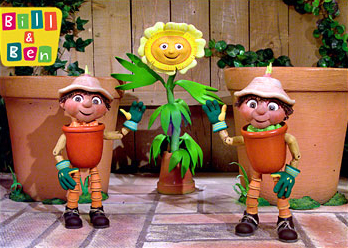 Flower Pot Men is a British children's program, produced by The BBC, first transmitted in 1952, and repeated regularly for more than twenty years. Originally, the program was part of a BBC children's television series titled Watch with Mother, with a different program each weekday, most of them involving string puppets. Flower Pot Men was the story of Bill and Ben, two little men made of flower pots who lived at the bottom of an English suburban garden. A new version of the show titled Bill & Ben was produced in 2001, this time involving stop-motion animation, 35mm film style and full color, and made by Cosgrove Hall Films with a team of ten animators.