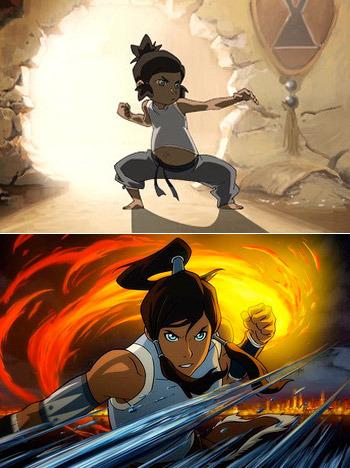 Over a decade later, and you still gotta deal with it.
Screenwriter: So now that we’ve established that both main characters were once children, we can move on.
Producer: I guess it will be helpful moving forward to know that these were once children, and that they weren’t born fully grown men.
— Screen Rant Pitch Meetings for Star Trek (2009)

Sometimes a work begins by showing us the main character as a child. It can also show us an important supporting character, but it's usually the main character. These kinds of introductions are barely longer than a few minutes at most, and they seldom affect the plot in any way other than being a way to highlight some basic character motivation, or perhaps provide the origin of some Catchphrase. After the introduction is done, we are transferred to the present day (often via Age Cut) where the main character is grown up (and played by the featured actor or actress).

May show them playing with a Weapon Jr. See also Kid Hero All Grown Up. It might show us some Early Personality Signs. Subtrope of Distant Prologue.

Truth in Television considering it's pretty universally true that people's most formative experiences tend to happen in their childhood.

In the opening scene of this movie, a child version of Judy and some friends put on a play that explains the history of the Zootopia world.

In the opening scene of this movie, a child version of Judy and some friends put on a play that explains the history of the Zootopia world.