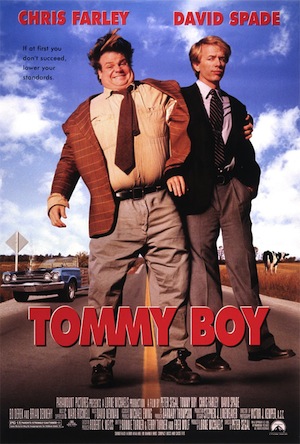 Holy shnikies!
Tommy Callahan: Hey, I know I'm not probably the answer you guys are looking for, but I feel I gotta do something. You're right. I don't know much about this stuff, but he does.
Richard Hayden: Oh, no!
Advertisement:

A 1995 comedy directed by Peter Segal and starring Chris Farley and David Spade.

Tommy Callahan (Farley) is the Manchild son of charismatic auto-part-factory owner "Big" Tom Callahan (Brian Dennehy). Big Tom is marrying Beverly Barish-Burns (Bo Derek), a trophy wife who brings along her rather conniving adult "son" Paul (Rob Lowe), but things go downhill when Big Tom suffers a fatal heart attack at the wedding reception. His now-widow and stepson quickly set plans in motion to sell the company to rival auto magnate Ray Zalinsky (Dan Aykroyd), which will make them rich but put all the workers at Callahan out of business.

The only way for Tommy to avert this is to go on the road with his father's sycophantic assistant Richard (Spade) and sell enough orders for brake pads to make the company profitable. But will a bumbling idiot who took seven years to finish college have enough business savvy to make a sale... and will he be able to overcome the scheming of his new "family"?

Not to be confused with Tomboy. See also Black Sheep (1996), a another comedy film starring Chris Farley and David Spade released the following year.