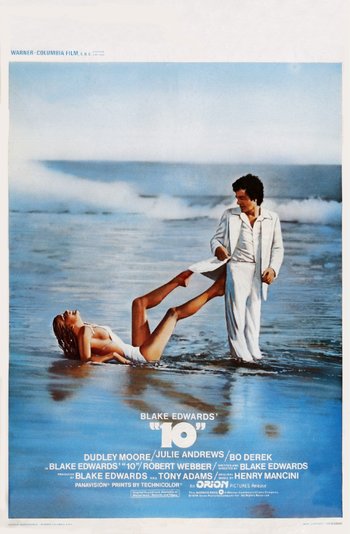 Try not to stare.
"A temptingly tasteful comedy for adults who can count."
— Tagline
Advertisement:

10 is a 1979 romantic comedy written, directed and co-produced by Blake Edwards for Orion Pictures.

The film follows musical composer George Webber (Dudley Moore) as he goes through a midlife crisis. Much to the chagrin of his actress girlfriend Samantha Taylor (Julie Andrews), George starts ogling younger women and conspicuously spies on his next-door neighbor who frequently hosts orgiastic parties.

Suddenly he spots an exotically beautiful young woman by the name of Jenny (Bo Derek), who's on her way to her wedding. George then makes it a goal of his to have an affair with her, even though she's newly married, and even if he has to follow her and her husband to Mexico on their honeymoon.

This film is Best Known for the Fanservice, as Bo's sexy one-piece swimsuit and cornrow-festooned hair made her a locker-room-poster sensation in the late seventies, dethroning the previous reigning pin-up queen Farrah Fawcett. But her career wasn't the only one boosted by it — for most audiences outside of the U.K., this was their introduction to Dudley Moore, who subsequently toplined a clutch of romantic comedies in the early 1980s.