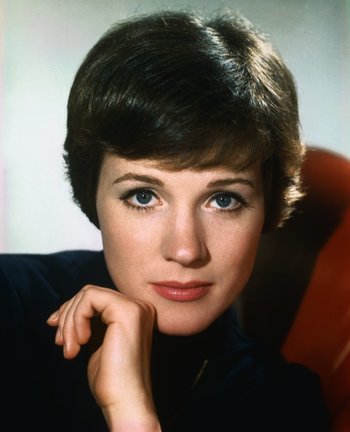 Practically perfect in every way.
"All careers go up and down like friendships, like marriages, like anything else, and you can't bat a thousand all the time."
Advertisement:

There are many people who could be regarded as the Princesses of Television. Now, meet the Queen— the acting one, that is, not the British one who resides in Buckingham Palace. That is a whole different kettle of fish, though they are both British.

Dame Julie Andrews DBE (born Julia Elizabeth Wells on 1 October 1935 in Walton-on-Thames, Surrey) is a world-famous English actress, bast known for her roles as Mary Poppins and as Maria von Trapp in the film version of The Sound of Music.

Andrews grew up performing in music halls as a child, after her parents discovered her "freakish" four-octave singing voice. In 1948, at age 12, she performed at the Royal Command Variety Performance in London, the youngest person ever to do so. After crossing the Atlantic, Andrews made her Broadway debut (on the eve of her 19th birthday) in The Boy Friend, then became a national sensation as Eliza Doolittle in the smash hit My Fair Lady. In early 1957, she took a week off from the show to star in the TV production of Cinderella, which became the most-watched television broadcast in history.

While performing her third Broadway lead—Queen Guenivere in Camelot—she was approached by Walt Disney, who asked her to star in his upcoming live-action adaptation of Mary Poppins. She agreed, and two years later won Best Actress in a Leading Role at both the Golden Globes and the Academy Awards of 1964, beating out Audrey Hepburn, who was nominated only for the former award, for her role as... Eliza Doolittle in the film of My Fair Lady. (On top of that, Andrews gave a classic Take That! acceptance speech at the Golden Globes, in which she thanked Jack Warner for having rejected her for the film version of Eliza, thus enabling her to trump Hepburn.) The next year she had an even bigger smash hit, starring in the film of The Sound of Music.

Her career tapered off in the '90s, partly due to a botched vocal surgery that cost Andrews her four-octave range, but she returned full-force as Queen Clarisse in The Princess Diaries in her first Disney film in 40 years, a role she reprised in the sequel. She went on to voice Queen Lillian in the Shrek franchise, star as Lily in The Tooth Fairy, and voice Marlena Gru in Despicable Me and Despicable Me 3. She was also in Aquaman (2018) as a giant sea monster of all things.

Today she is well known as a writer, actress, director (of the Broadway revival of The Boy Friend) and spokeswoman. Her singing voice is slowly coming back, although she will probably never regain those four octaves — her first public singing performance was in The Princess Diaries sequel. Hardened crewmen cried.

She and director Blake Edwards were married in 1969 during the filming of Darling Lili and remained married until his death in 2010. She counts comedienne Carol Burnett, as well as her late The Sound of Music co-star Christopher Plummer and three-time co-star James Garner, among her closest friends.

Andrews' other famous films include S.O.B., Thoroughly Modern Millie, The Americanization of Emily,note Her personal favourite role, and co-star James Garner's as well. and Torn Curtain (directed by Alfred Hitchcock).

She's also written several children's books under the name Julie Andrews Edwards, the most famous of which are The Last of the Really Great Whangdoodles and Mandy. Interestingly, most of the marketing for them doesn't mention the author's work as an actress. They're quite charming. She is also the lead in Julie's Greenroom, an original Jim Henson Company production featuring Andrews hosting a group of young children who are learning about the theater, with top-flight guest stars such as Idina Menzel; it can be seen on Netflix. Additionally, she narrated Broadway: The American Musical, a six-part PBS documentary miniseries on the Broadway musicals where she started her career that aired in the fall of 2004.

She also swears like a sailor given the opportunity. She also met David Tennant once - he almost died of glee and sheer joy.