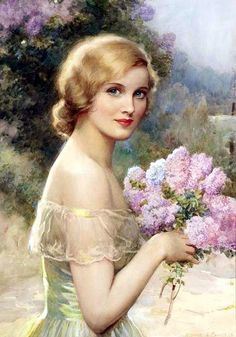 "They were charming, especially the oldest, a blonde of eighteen, fresh as a flower, and very dainty and pretty! Ah, yes! The pretty Englishwomen have indeed the look of tender sea fruit. One would have said of this one that she had just risen out of the sands and that her hair had kept their tint. They all, with their exquisite freshness, make you think of the delicate colors of pink sea-shells and of shining pearls hidden in the unknown depths of the ocean."
— Narrator of Guy de Maupassant's short story "The Wreck"
Advertisement:

An English Rose is a nostalgic idea of a beautiful young English lady. She is virtuous and possesses a certain type of modest, natural beauty. This character is always of English breeding, and likely to speak in the RP accent.

If from a historical period (and upper-class), she was raised to be a Proper Lady. A modern specimen does not need to follow the full set of Proper Lady ideals but still has to be a Nice Girl: well-mannered and goodhearted.

An English Rose is often composed and dignified in any social setting. A major characteristic is her humility in terms of family and society. Her will can be iron-hard, while seemingly subservient. Before marriage, she tends to be a more spirited version, and if she marries, she doesn't necessarily lose that spirit. One of the charms of the English Rose may be her ability to maintain decorum and pleasure regardless of any trouble.

Regarding her looks, English Rose has a set of associated characteristics:

There is no requirement for actresses portraying her to actually be English or even British. However, it's rare to find actresses playing these characters in English-language media (foreign productions are obviously another story) from outside the Old Commonwealth (minus Canada).

Compare with its sister tropes, Yamato Nadeshiko from Japan, the "Bonne Belle" type of the Southern Belle from southern USA, and Circassian Beauty from the Caucasus. Also compare The Woman Wearing the Queenly Mask and the Princess Classic. Contrast with The Lad-ette.

If the trope is Played Straight, she must be English. Englishness is defined by her origin and family background. English Roses from a Fantasy Counterpart Culture and sci-fi futuristic versions are allowed: England might not exist in the setting, but if said land and culture are based on real-life England, associated character tropes may be used as well.

Real Life examples are unlikely because this trope requires knowledge about the woman's personal relationships with her family and acting for their benefit in society.