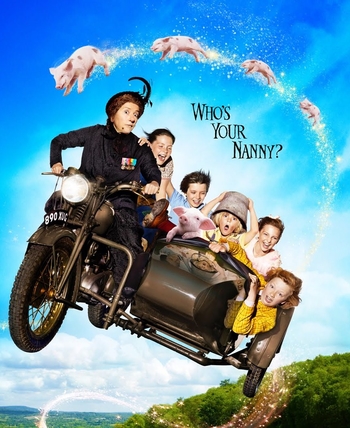 "She had style, she had flair, she was there — that's how she became the Nanny!
Who would have guessed that the girl we described was just exactly what the doctor prescribed?
Now, the father finds her beguiling —Watch out, C.C. —
And the kids are actually smiling — such joie de vivre!"
— The Nanny theme song
Advertisement:

A Magical Nanny is a woman who is hired to look after children, but ends up having a profound effect on the whole family. She may have genuine magical powers or she may just have a magical effect on the household. Even children who have scared off a number of previous nannies can be tamed by a Magical Nanny.

A sub-flavor includes magical nannies that are literally Magical Nannies. Often they will be a parody or even Deconstruction of the Ur-Example, Mary Poppins.

While Magical Nannies are often threatened with the sack, they are not easy to get rid of. When their employment ends, it will be on their own terms. Typically they will decide that their work here is done or they will stay and marry the head of the household. (Note that they never become the Wicked Stepmother.) The latter is particularly common in the Romance Novel; indeed, the heroine may become the stepmother first and still fulfill the role of Magical Nanny.

Contrast the Babysitter from Hell and the Badly Battered Babysitter.