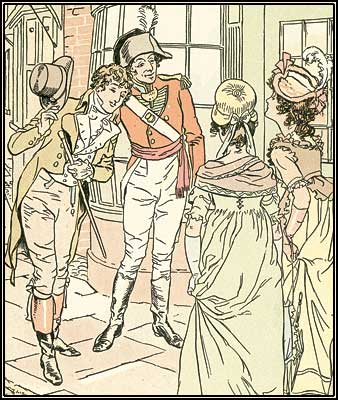 "It is a truth universally acknowledged, that a single man in possession of a good fortune must be in want of a wife."
— Opening line
Advertisement:

The second novel by Jane Austen — a Take That! at Love at First Sight.

Possessing one of the best-known opening lines of all time, the story is a sharp, witty, insightful and tremendously funny romance, both mindful and mocking of sexual politics as they relate to social mores. Elizabeth Bennet is the second of the five daughters of Mr and Mrs Bennet, landed gentry who live in Longbourn, a small estate in rural England at the time of The Napoleonic Wars. Her father is a cynical, snarky recluse, her mother is a fatuous, rather ill-bred airhead obsessed with her daughters' marriage prospects, and her elder sister Jane is a sweet-natured beauty. Her younger sisters, by contrast, are uniformly "silly": pretentious, grumpy Mary; giggly, easily-led Kitty; and uncontrollable, foolish Lydia.

The story follows the Bennets and their attempts to marry for love, despite being in a position that makes such a goal severely impractical. While Jane quickly falls for the well-off, good-natured newcomer Mr Bingley, Elizabeth is entirely too cynical to attract as sweet a man. Her nature does, however, attract a variety of other suitors: the well-connected but unctuous vicar Mr Collins, a man without any sense of humour lost in the novel's World of Snark; the dashing, penniless and self-deprecating foot soldier Mr Wickham; and Bingley's friend, Mr Darcy, who to all appearances is a cold-blooded and arrogant bore. Meanwhile, Lydia causes trouble for everyone, and Elizabeth and Darcy learn a lesson or two about first impressions and making assumptions.

It has been adapted into several theatre plays, movies and TV series; the 1940 adaptation stars Greer Garson and Laurence Olivier, the 1995 BBC serial will forever see generations of women swoon over Colin Firth as the most romantic man alive whether he particularly wants them to or not, and the 2005 movie saw Keira Knightley star as Elizabeth and Matthew Macfadyen as Darcy. In 2009, Marvel Illustrated produced a Comic-Book Adaptation, script by Nancy Butler, pencils by Hugo Petrus and covers by Sonny Liew. The Musical First Impressions is a 1959 Broadway flop starring Farley Granger as Darcy.

As a famous public domain novel, it was subjected to nerd-ification in 2009 with the publishing of Pride and Prejudice and Zombies. Many modern writers have picked up where Austen left off, trying their hand at publishing continuation stories about Darcy and Elizabeth as well as some of the minor characters; one notable example is the 2011 unofficial sequel Death Comes to Pemberley by P.D. James. In 2013, Jo Baker wrote a version of the story from the perspective of the servants, Longbourn.

In terms of modern adaptations, there's always the Bridget Jones franchise, which takes on this, and then Austen's Persuasion for its sequel. The Lizzie Bennet Diaries is a modernised adaptation (headed in part by Hank Green of the VlogBrothers fame. It began airing on YouTube in early 2012 in the form of a video blog. In this version there are three Bennet sisters (Jane, Lizzie and Lydia) and Charlotte's role is greatly expanded. In 2018, Ibi Zoboi wrote Pride: A Pride & Prejudice Remix which focuses on two teenagers in Bushwick, Brooklyn and tackles issues like gentrification and racial prejudice. Oh, and there's Matches and Matrimony, a Dating Sim.

By the way, the title refers to the two qualities that keep Darcy and Elizabeth from getting together. "Pride" is usually associated with Darcy (his initial snobbery toward those considered beneath him in social rank) and "prejudice" with Elizabeth (her judgements of Darcy and Wickham based solely on first impressions and hearsay, without really knowing either of them); however, they each display both qualities.

It is a trope universally acknowledged: