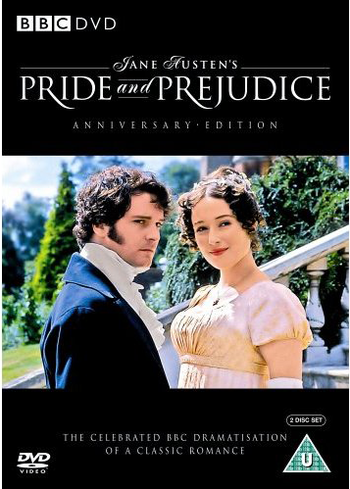 In 1995, Jane Austen's Pride and Prejudice was adapted into a six-episode mini-series as a co-production between The BBC and A&E.

Wealthy gentleman Charles Bingley (Crispin Bonham-Carter) buys the estate at Netherfield near the village of Meryton in Hertfordshire, to the delight of the lady of the house at nearby Longbourn, Mrs. Bennet (Alison Steadman), who has five daughters but no sons with her husband (Benjamin Whitrow). Believing in the "universally acknowledged" truth that all rich, single men are anxious to get married, Mrs. Bennet hopes that Bingley will choose one of her daughters and ensure their long-term financial stability. At a country dance, Bingley takes an immediate liking to the eldest Bennet daughter, Jane (Susannah Harker), but the haughty behaviour of his close friend, Fitzwilliam Darcy (Colin Firth), creates a much worse impression with the second Bennet daughter, Elizabeth (Jennifer Ehle).

Her opinion of Darcy sours further when the dashing George Wickham (Adrian Lukis), a Royal Army officer, is posted to the local regiment and tells Elizabeth that he was promised a living as a clergyman by Darcy's father, but Darcy revoked the promise after his father died. When Darcy blindsides her with a very backhanded marriage proposal, she rejects him with a scathing "The Reason You Suck" Speech, unwittingly setting a great deal of soul-searching in motion. However, when Wickham runs away with the youngest Bennet sister, Lydia (Julia Sawalha), Darcy's actions surprise Elizabeth and lead her to completely re-evaluate her impression of him...

Tropes used in the mini-series: