They Wasted a Perfectly Good Sandwich 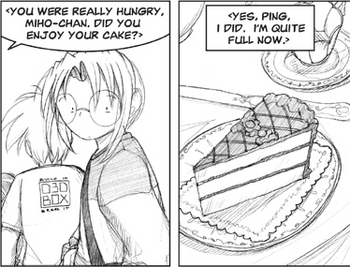 "You know what? He forgot his latte."
— Droopy, "Thanks a Latte"
Advertisement:

The characters order something arbitrary like salad or coffee, have a conversation, and then leave before ever touching their order. You will likely not notice this unless you happen to be very hungry when it happens; then it will drive you up the wall.

This also applies when a character gets a snack or something to drink, but you barely see them touch/eat it.

Live-action shows also have another problem to contend with: food spoils easier in studio lighting. Therefore, most of the food used is a prop, unless characters are specifically meant to eat it. Equally obviously, if a scene requires multiple takes (which includes shooting from more than one angle), you don't want the actors to be forced to continually stuff their faces, only to have to make them a brand-new sandwich for the next take. Requiring the actors to eat the food can also create continuity problems in the event of retakes or editing (Skins in particular has been mocked for a scene where a sandwich changes state every time the camera angle does). And if the actor were to have a big enough portion of food in their mouth, it might make dialogue harder to hear.

A variant of this trope is in a cop drama where two officers are drinking coffee while parked and see a car speeding past; as hot coffee is not something you want flying about during a chase, said coffee goes out the windows.