Cheating with the Milkman 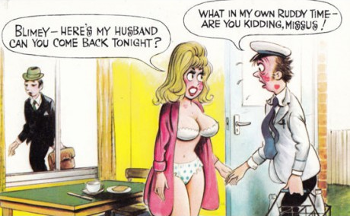 "I don't look like my Mommy or my Daddy. I look like the mailman."
— Interviewee, Kids Say the Darndest Things
Advertisement:

Although there were some Truth in Television incidents of this, it is less based on them than it is the general fear of a person's spouse cheating on them while they're away at work, especially if it's with someone who comes straight to the door (well, in most cases). As few milkmen are still working, it is more common nowadays for the wife to cheat with a deliveryman (the mailman, UPS, FedEx, pizza, etc.), a repairman (plumber, electrician, cable guy, etc.), or some other service provider that has to be physically present in the house, such as a pool cleaner. One that dates from an earlier period is the iceman (the person who delivered ice door-to-door, mostly for use in old-fashioned iceboxes

). Variants also show up in different places; for instance, the stock occupation for this trope in Spain is the butanero (a delivery man for the bottles of gas used to heat homes and fuel stoves before most of Spain was connected to line gas, aided by the fact that the butaneros had to be really strong to carry the giant, heavy bottles).

A variant is for this to be the reveal of a Who's Your Daddy? plot. If this relationship produces a child who clearly does not resemble the wife's legal husband, it's a case of Chocolate Baby.