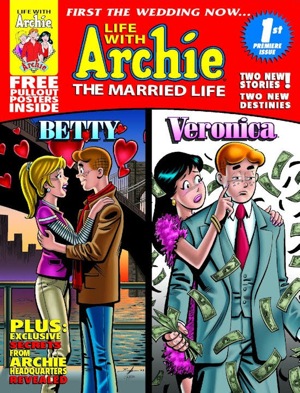 Notice the lack of a cover gag?
Love or hate...life or death...Betty or Veronica...the end or just the beginning...the road taken or the road not taken...
— Dilton Doiley
Advertisement:

Life With Archie: The Married Life was a storyline in Archie Comics that ran for 37 issues from 2010 to 2014.

The comics differ from the norm in several ways, being printed in magazine format and having Darker and Edgier storylines, with Soap Opera plot twists and situations.

Not to be confused with Afterlife with Archie, which is a zombie apocalypse comic.