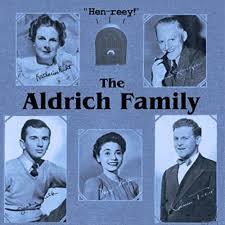 Henry Aldrich started out as a minor character in the Broadway play What a Life by Clifford Goldsmith, which ran from April 1938 to July 1939 for a total of 538 performances. Henry was only intended as a comic relief, but instead turned out to be the most memorable character there. As described by the press, "Chief amusement centres in Henry Aldrich (Ezra Stone), a cross between Penrod and Willie Baxter, who attends classes mainly in the principal's office. With a talent for head-on collisions, always ingenious, never crafty, always there with an answer, never with the right one, brash, bouncing, rumpled, rattled, rueful by turns, Henry grows into that rare thing on the stage — a person..."

Rudy Vallée asked Goldsmith to adapt the popular character for use in radio. A few short sketches based on the theatrical play were the first such use for Henry Aldrich, followed by his own segment in The Kate Smith Hour. Then the full series The Aldrich Family was produced, running from October 1939 to April 1953, with Goldsmith becoming "the highest paid writer in radio". Ezra Stone continued playing his character until 1942, when he left to serve in World War II. He was replaced by Norman Tokar (1942-43), Dickie Jones (1943-44), and Raymond Ives. Stone returned to the role from 1945-52. The final voice actor for the character was Bobby Ellis (1952-53).

The show was also adapted to cinema by Paramount Pictures. A total of eleven Henry Aldrich films were released between 1939 and 1944:

A television adaptation debuted in October 1949, lasting until May 1953. The series was notable for its unusually frequent casting changes (only Henry's father Sam was played by the same actor for the entire run), with Henry Aldrich himself being played by a total of five actors: Robert Casey, Richard Tyler, Henry Girard, Kenneth Nelson, and Bobby Ellis. A pre-fame Paul Newman appeared in several episodes of the final series as a supporting character.

This show and its adaptations provide examples of: