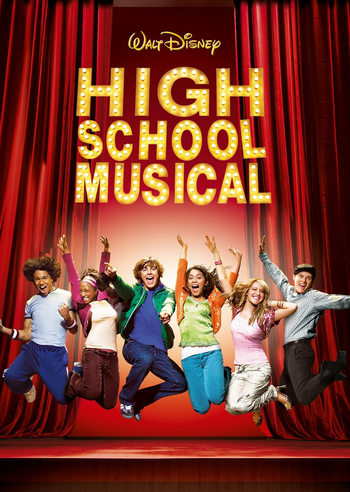 We're all in this together...
Jack Bolton: You're the playmaker... not a singer... right?
Troy Bolton: Did you ever think that maybe I could be both?
Advertisement:

High School Musical is a Disney Channel Original Movie that premiered on January 20, 2006. It was directed by Kenny Ortega, written by Peter Barsocchini, and starred Zac Efron, Vanessa Hudgens, and Ashley Tisdale.

The plot centers around a group of students in the fictional East High School in Albuquerque, New Mexico. Golden boy and basketball team captain Troy Bolton (played by Efron) has a Meet Cute with the brainy Gabriella Montez (played by Hudgens) at a ski resort on New Year's Eve, which transitions into awkward attraction when she later transfers to East High. The two of them end up being considered for the school musical, to the consternation of the Evans twins, Sharpay (played by Tisdale) and Ryan (played by Lucas Grabeel), who rule the drama club. Also unhappy at this development are Troy and Gabriella's best friends, fellow jock Chad Danforth (played by Corbin Bleu), and academic decathlon leader Taylor McKessie (played by Monique Coleman), who would prefer that Troy and Gabriella not get distracted from their respective clubs. Can Troy and Gabriella convince East High that they can do theater and their respective niches at the same time?

Oh, and did we mention it's also a musical?

It was an unexpected success, spawning a concert tour, a novel series, two sequels, a spinoff and a web series:

The franchise inspired Stitch Meets High School Musical, a cute little short anime parody where Stitch plays basketball and dances to "We're All in This Together", as well as a bunch of teen musicals by the Disney Channel, including:

It also influenced Glee being greenlit and thus the success of the Pitch Perfect franchise.

We're all in these tropes together!