Anime / Highlander: The Search for Vengeance 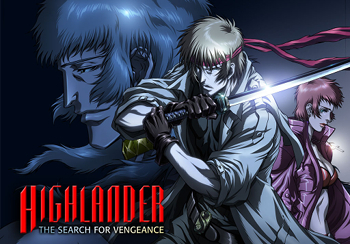 Highlander: The Search for Vengeance is a 2007 animated adaptation of the Highlander series directed by Yoshiaki Kawajiri.

Set in an Alternate Continuity from the films, the anime follows the story of the immortal Colin MacLeod as he searches for revenge against his rival immortal Marcus Octavius, the Extremist who killed Colin's wife.

Set in the distant future, Colin meets up with a resistance group, partially held by the prostitute Dahlia, that is being oppressed by Marcus and plagued by a disease only Marcus has the vaccine to. Throughout the story we get flashbacks of Colin's failed attempts to kill Marcus. Marcus seems to be perpetually attempting to rebuild the glory of his beloved Rome whereas Colin, blinded by his hatred, joins whatever cause is opposed to him in the hope of taking his head.