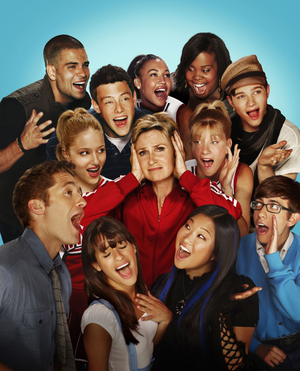 Don't Stop Believin'...
"Being part of something special does not make you special; something is special because you are a part of it."
— Rachel Berry, Dreams Come True
Advertisement:

What happens when you take the melodrama of Degrassi and mix it with the musical setting of High School Musical? You get Glee, where every episode is a Very Special Musical Episode!

And all the while, they're singing. The first episode alone featured music from such disparate sources as Guys and Dolls and Journey, and the show went on to showcase everything from Charlie Chaplin to Lady Gaga. The musical numbers were frequently given an in-universe justification with the activities of the Glee club, but just as often sprang fully-formed from the minds of characters in normal situations, as with most musicals. That Reminds Me of a Song was the order of the day, and in the event that somebody broke into a full-on song and dance sequence with back-up dancers and props and so forth, it was generally assumed that these moments appeared to be taking place at least partially in the individual's thoughts.

The first episode actually aired in spring of 2009 as a special preview before the actual premiere that fall. The show had a full-season order by the time the other episodes started airing, and was renewed for both a second and third season before the first was halfway finished. The series led to a touring cast concert, 3D movie of said concert, and reality show spin-off The Glee Project where hopefuls competed to land a recurring role on the series.

The show was renewed for a fourth season in 2012, and received another double-renewal in 2013. It might have lasted longer as well were it not for the untimely death of Cory Monteith, Finn Hudson's actor, in the summer of 2013, a few weeks before the fifth season was due to begin filming. It was later confirmed by Ryan Murphy that the sixth season would be the final season, and it ended on March 20, 2015 after six seasons and 121 episodes.

The series has had a Fake Crossover with the Archie universe

in "Archie Meets Glee". It also spawned a British singing contest called "Don't Stop Believing" (yes, with the 'g') that lasted six episodes in summer 2010, was won by the only team who sang Barbra Streisand, and has never been mentioned since.

In "The Rocky Horror Glee Show", the cast do various versions of songs from Rocky Horror Picture Show, including "Time Warp.

In "The Rocky Horror Glee Show", the cast do various versions of songs from Rocky Horror Picture Show, including "Time Warp.