Wearing It All Wrong 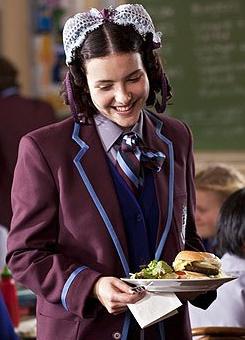 Making a boob of yourself.
Random Girl: My scarf goes on my nose to weather the storm.
Bert: On your nose?
— Sesame Street, "All Dressed Up"
Advertisement:

We've all seen people wearing the wrong clothes — like Adults Dressed as Children, or wearing a swimsuit to work — but wearing the right clothes, but on the wrong body parts, is even more hilarious, and that's where this trope comes in!

Quite often it's a little kid doing it to highlight how goofy little kids can be, and a common move for fictional toddlers is putting their pants, undies, or diaper on their head.

Maybe the joke is that a character is so dumb or naive they don't know which garment goes where (e.g. a character tries putting their socks over their shoes).

They might also be doing something goofy to make a small child laugh/stop crying/fall asleep.

Another variant is seen in Edutainment Shows, meant to teach kids to get dressed. (e.g. "Does this go on your hand? No! Does it go on your foot? No!")

Sometimes seen in parodies of Underwear of Power with characters playing superhero by actually wearing underwear over their pants. Improvised Diaper can overlap with this if the baby is wearing another piece of clothing as a diaper. Compare Dressed in Layers for clothes worn under other clothes.

Some girls and a boy wear their winter clothes on the wrong body parts.

Some girls and a boy wear their winter clothes on the wrong body parts.