The fifteenth episode of the third season of Rugrats.

Tommy goes through a nudist phase, wanting to be more like Spike.

Tommy and the Secret Club:

Angelica starts a secret club, and Tommy is the only one of the babies allowed in, which he finds unfair. 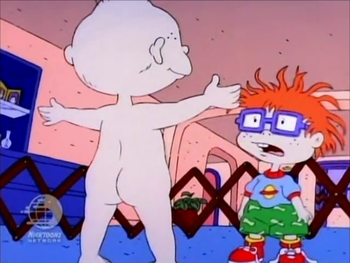 "Nakey is good! Nakey is free! Nakey is... nakey!"
Advertisement:

"Tommy and the Secret Club" provides examples of: