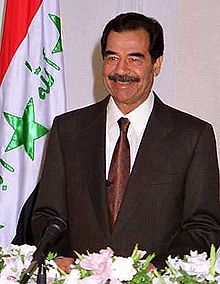 "Three whom God should not have created: Persians, Jews, and flies."
— Hussein family proverb
Advertisement:

Saddam Hussein Abd al-Majid al-Tikriti (28 April 1937 – 30 December 2006) was the fifth president of Iraq, from 16 July 1979 until 9 April 2003. Leading member of the Ba'ath Party, a revolutionary group that espouses a mix of Arab socialism and Arab nationalism. Long before Saddam, Iraq had been split along social, ethnic, religious, and economic fault lines: Sunni versus Shi'ite, Arab versus Kurd, tribal chief versus urban merchant, and nomad versus peasant. When Saddam came to power, he worked on fixing it and modernizing Iraq. Unfortunately, he was a believer in the Josef Stalin School of Fixing and Modernizing Backward Countries: being as brutal as possible.

Over the next three decades, Saddam would proceed to modernize the Iraqi economy, build one of the most robust welfare and education systems in the entire Middle East, and grant more rights to women, but also order brutal persecution against ethnic minorities, particularly against the Kurds, who were murdered by the hundreds of thousands with chemical weapons during events such as the Al-Anfal campaign

(making him the first dictator after Adolf Hitler to have committed genocide using poison gas), as well as locking Iraq under a horrific era of immense repression, extrajudicial killings and persistent human rights violations. Also famous for launching the Iran–Iraq War, which resulted in over a million deaths due to Hussein's ambitions to take over Iran, and the 1991 Gulf War, where Iraq basically fought half the world. He was executed in 2006 by the new Iraqi government following a US and British invasion of Iraq.

To this day, the debate still continues on how good or bad it was to remove him from power. While nobody saw him as a good man, the chaos that ensued after his removal in Iraq (and continues to this very day) had many believe that he was the Lesser of Two Evils.

It is common for conservative U.S. politicians, both when he was alive and long after his execution, to mis-pronounce "Saddam" as if it was a homophone of "Sodom" (it is not).

Perhaps most interesting when it comes this very wiki, Hussein was also a writer of literature. His novels, of which the first two are ostensibly romance novels, are believed to have been written with at least some help from ghostwriters, and were published in the latter part of his time as dictator of Iraq under the pseudonym "He Who Wrote It", a traditional way in Arabic writing to preserve anonymity. The novels are noted to bear all the hallmarks of an amateur writer operating without an editor, especially having a tendency to frequently halt the plot to have the characters or the narrator deliver rambling and sometimes aimless Author Filibusters about Hussein's views on world society, history, politics, and proper governance, and of course, the occasional conspiracy theory about his enemies, both real and imagined. The following four novels are widely believed by, amongst others, the CIA to be written by Hussein. Should you ever manage to get hold of a copy, make sure to add tropes:

A notable detail to add to this is that Saddam was also a fan of literature to the point that he was infamous for writing a religious scripture with his blood in his belief of devotion. In fact, this was the foundation of one of his very few policies as a dictator that be argued to actually have been successful by most standards. During his time as Ba'ath Party vice-chairman from 1968 to 1979, Saddam was appalled to discover that illiteracy was a widespread problem amongst the Iraqi people, and so he instituted a country-wide draconian literacy program, where failure to attend mandatory reading classes became punishable by three years in jail. As a result, Iraq became the country with the highest percentage of literacy in the region, and this number has actually first started to decline with the recent instability in the country.