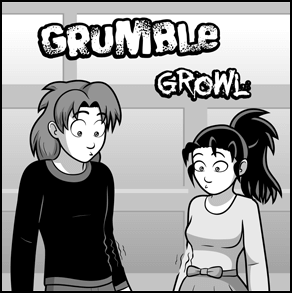 The digestive system can sometimes be a noisy thing, from the stomach growling when you're hungry to the various noises food and/or gas make as they're being processed and passing through. In media, these sounds are often used to make very clear what's going on with a character, in two distinct ways.

If they're really needing to eat, or are known for having a huge appetite, their hunger can be indicated by loud stomach growling. In comics and animation, this is often accompanied by the belly visibly rippling or shaking. Sometimes this growling is loud enough that other characters can hear it, which can cause embarrassment; it can also lead to the character changing their plans on the fly to get something to eat. It can also ruin someone's attempt to hide from someone else.

On the other hand, if the character has eaten, rumbling and/or gurgling can mean that they're having some indigestion or are just a Gasshole. At worst, deep basso gurgling means major trouble is brewing, which often leads to a Potty Emergency or even Potty Failure in severe cases.

The medical term for this is the amusingly onomatopoeic word 'Borborygmus

', though often it's simplified to just 'Stomach rumble'.

Not to be confused with Guttural Growler.

Note: This is often Truth in Television, but please do not list Real Life occurrences on this page, otherwise we would be here all year.

Other examples (sorted by type):

Scooch Pooch gets a stomach ache from eating nachos.

Scooch Pooch gets a stomach ache from eating nachos.