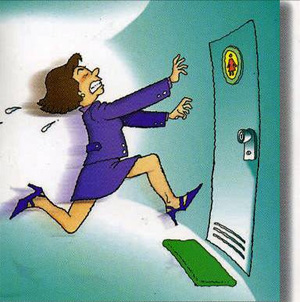 A comedy routine which involves a character really having to go to the bathroom, and being prevented from doing so by various plot contrivances. This often climaxes in a frenetic scene where the character darts desperately from location to location, clutching their groin, searching for someplace, anyplace where they can empty their bladder. The search will usually prove unfruitful — and the visited places progressively more embarrassing — as the routine wears on.

For example: the routine may start with the character finding some very obvious way of filling up his bladder, such as by chugging a Klatchian Coffee or a Gigantic Gulp. He makes a mad dash to the men's restroom, only to see a sign on the door: Closed for Cleaning. He tries to sneak into the women's restroom instead, and we hear screams coming from inside followed by a couple of irate women chasing him out. The character then runs outside and darts behind a nearby tree to relieve himself, only to find it occupied by a child playing hide-and-seek. The character then runs off and ducks into a side street, only to find a young, cardigan sweater-wearing couple strolling down it. The character quickly high-tails it out of there and hides behind a nearby school bus. No sooner has he started unfurling his pants, than he looks up and notices that the bus is filled with a group of gawking nuns who are staring slack-jawed down at him. After a few more failed attempts at hiding and peeing, the character finally ducks into a building, runs down a dark corridor and into a room filled with rows of folding chairs, a podium, and a waste-paper basket. Sighing happily, the character unzips his trousers and starts relieving himself into the waste-paper basket — at which point, the lights go on and a large group of burly police officers start filing into the room. Only now does the character notice the huge sign hanging on the wall at the back of the room which reads: "International Order Of Burly Police Officers Training Seminar #27: How to Spot And Subdue A Sexual Predator." As the scene fades to black, we hear the sound of a hundred nightsticks hitting the cranium of our hapless potty-goer.

Note that the above scenario takes a Potty Emergency to its logical severe extreme; most Potty Emergencies won't end like this, but instead, end with the character fainting or just giving up and going in some random place, damn the consequences. Or, even more humiliatingly, it will end when the character just can't hold it any longer, resulting in Potty Failure (Embarrassing Damp Sheets if asleep), or, if they were frightened, Bring My Brown Pants. Very rarely does it end with him/her finding a suitable bathroom in the nick of time, but when it does, it ends with the character often enjoying that delicious euphoria that comes when such stress is relieved.

A person trapped in a Potty Emergency can expect to be sadistically subjected to all sorts of "watery" imagery — flowing water, spraying water, splashing water, kids running through sprinklers, water fountains, and worst of all, lemonade. All of which will remind him of the one thing he so desperately wants to do, but can't. Relatedly, a character who has to go to the bathroom while asleep will have dreams of such watery imagery. If they are currently in a body of water with an emergency, they may resolve this by just relieving themselves on the spot.

This trope can also happen on another end of the body, as the effect of food poisoning or a laxative or emetic prank.

Sometimes a variant has the character(s) looking for a place to perform some non-potty-related but similarly private activity such as changing clothes, making out, or whatever. If this trope happens to a character who had been woken up and/or freed after an incredibly long time, it's Rip Van Tinkle. A video game that can potentially force players into one of these by denying them a chance to stop for a breather in the middle of some very long task expects them to have a Bladder of Steel.

Commonly happens in a Toilet Training Plot. Sometimes this is punctuated with the character engaging in a little Calling Your Bathroom Breaks. Compare with Anti-Sneeze Finger, Inconvenient Itch, and Excrement Statement. See Jar Potty for one solution to this problem.

While we can all attest to this in our own lives, we do not need to do it here. (Fictional ones can be unpleasant enough.)