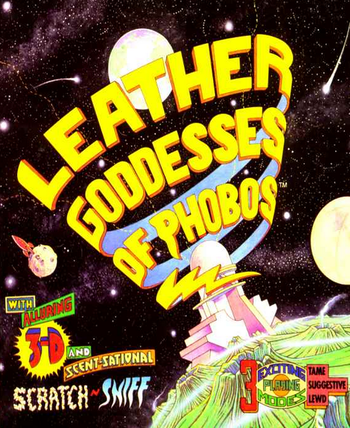 Leather Goddesses of Phobos is an Interactive Fiction game written by Steve Meretzky and published by Infocom in 1986.
Advertisement:

As the title suggests, it's a parody of sci-fi B-movies, which has you battling the eponymous Leather Goddesses as they prepare to invade Earth and enslave humanity. The packaging of the game includes several B-movie gimmicks, including a 3D Comic Book and a scratch-and-sniff card with numbered areas to be sniffed at appropriate points in the game.

As the title might also suggest, the game contains quite a bit of sexual content; how much depended on the "Naughtiness" level, which could be set to Lewd, Suggestive, or Tame.

The 1992 sequel, Leather Goddesses of Phobos 2: Gas Pump Girls Meet the Pulsating Inconvenience from Planet X!, is best not spoken of.