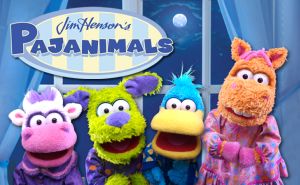 The Pajanimals is a preschool children's series made by The Jim Henson Company and featuring Muppet-style characters. The series was originated as a set of approximately two minute shorts featuring songs focused on issues related to bedtime, such as being afraid of the dark, having a scary dream, or waking up at night. Based on the success of the original shorts, a full-length series was created and began airing in 2011. The new series features the same characters and basic style, but adds guest characters and an expanded focus. While bedtime issues are still tackled, the series also addresses concerns of a more general nature to youngsters, such as fear of speaking in front of a class and concern about taking an extended trip away from home.

The show was made in part with the help of Jill Spivack and Jennifer Waldburger, creators of a commercial product called The Sleepeasy Solution, and the two serve as content consultants for the show and appear in parental guidance spots created for the program. The original shorts, along with the parental guidance spots, are available on DVD, but have not been shown on television since the full-length series began airing.

The full series formerly also aired on weekends on NBC stations as part of their NBC Kids block. Its second season began airing in October 2012 and ended in March 2013.

It is currently airing on Nick Jr. in the UK, but with British English child actors' voices dubbing over the American English voices.

As of June 2020, the complete series is available on both Netflix and Prime Video.

The Pajanimals contains examples of the following tropes:

Example of:
The Dreaded Pretend Tea-Party