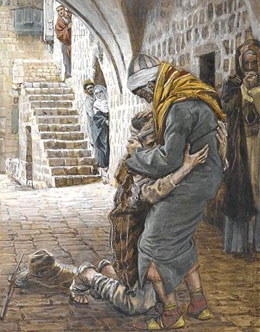 Pride goeth before a fall, but Forgiveness goeth before a stand.
"To err is human, to forgive, divine."
— Alexander Pope, An Essay on Criticism
Advertisement:

Forgiveness is perhaps the hardest thing anyone can do, because the things that truly need forgiving are usually those that hurt the deepest. Then again, has the offender really earned forgiveness? Do they have to? Or is forgiveness for such a sin even possible? Is there such a thing as an unforgivable sin? And just to complicate things further, who's to say forgiveness is a good thing in this situation, or at all?

So it is that this cornerstone Aesop causes a lot of problems to all involved, storyteller included.

The necessity of Forgiveness and its effects are all over the Sliding Scale of Idealism Versus Cynicism. While it commonly appears as the best choice, it's not anywhere near universal. It should probably be noted that every major real world religion insists forgiveness is necessary from its practitioners.

Again, this is a very difficult trope to pull off, depending on who the players are, what the offense was, and what the ramifications were.

The typical aesop is as follows:

The effects of (not) taking revenge:

A story pushing the most idealist of these by having the heroes forgive and pardon the trespassers commonly has said trespassers indignantly refuse the forgiveness and outstretched hand with treachery. This being fiction, the Laser-Guided Karma from spurning their generosity results in them getting eaten by a bigger fish, shot/stabbed by the heroes or any less forgiving companions who were on their guard, or simply choosing to die rather than live with the wounded pride of having accepted their help.

It's not uncommon for sadistic heroes to "forgive" the bad guy with a Cruel Mercy that makes it impossible to harm anyone ever again.

Contrast with a hard example of a Moral Event Horizon. See also: Easily Forgiven, Go and Sin No More, Forgiveness Requires Death, Cuteness Equals Forgiveness, This Is Unforgivable!, Forgiven, but Not Forgotten, Spared, but Not Forgiven.

Films — Animated
Films — Live-Action
Literature
Live-Action TV
Music
Poetry
Professional Wrestling
Puppet Shows
Theatre
Video Games
Visual Novels
Webcomics
Web Video
Western Animation
A common premise for entire stories in children's animation is that a character will commit some accidental offense, such as breaking another character's toy, etc. The other character knows that it was an accident, but is still hurt and can't bring himself/herself to forgive. The character that had the accident may do chores or favors to try to get the character that feels wronged to forgive them. The story ends with the character eventually finding it in their heart to forgive the other character. The original problem may or may not be resolved.
Feedback

Josh finally forgives Drake for taking him for granted all those years.

Josh finally forgives Drake for taking him for granted all those years.