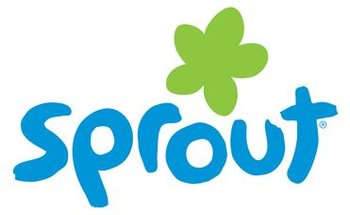 Sprout was a cable/satellite network that originated in Philadelphia. First tested as an exclusively Video on Demand service in April 2005, the Sprout channel itself didn't launch until September. The brand was created as a partnership between HiT Entertainment, Comcast, PBS, and Sesame Workshop. Comcast eventually became the sole owner in 2013.

One of Sprout's most popular features was "The Sunny Side Up Show," a morning block with live hosts and the kazoo-voiced puppet Chica the chicken (who received her own series, The Chica Show, in 2012). Another daily block was The Good Night Show, a block of programming themed around getting children for bed. Notably, unlike most U.S. networks of this type (i.e. Nick Jr., Disney Junior), Sprout actually aired advertising in-between programs. They had a stated policy of only airing ads targeted at children's parents, rather than children themselves, though naturally some ads might blur those lines.

In July 2012, Sprout kicked Qubo to the curb and took over programming NBC and Telemundo's Saturday morning blocks, under the names NBC Kids and MiTelemundo respectively. With the demise of Vortexx, NBC Kids became the very last traditional Saturday morning blocks on a major English-language U.S. commercial TV network to air cartoons, albeit of an educational nature. The block would come to an end in October on 2016, replaced by a Litton Entertainment block branded "The More You Know", based off NBC's long running series of public service announcements. note Traditional Saturday morning programming would return in markets with Sinclair Broadcast Group-owned network affiliates and their in-house KidsClick block in 2017, but even that was short-lived.

In 2014 Sprout marketed a tablet for children called the Cubby, which came pre-loaded with educational software and media featuring their properties. Unfortunately, the tablet—powered by an Allwinner A31 SoC—was fraught with a litany of issues, the most common being its fragile LCD panel. Many a parent who purchased a Cubby for their children complained about how easily broken the screen is, and that's considering the device's intended target audience i.e. toddlers.

that NBCUniversal Cable would relaunch Sprout, effective September 9, and re-brand the network as Universal Kids in an attempt to broaden the channel's demographics.

The following programs were broadcast on Sprout in the United States (a (*) indicates it aired on NBC Kids prior to that block's ending):

The following programs no longer air on Sprout but were previously seen on either the channel or on demand: