Series / Play With Me Sesame 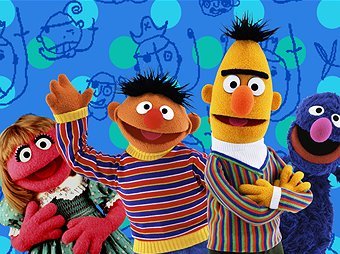 When we say "PLAY WITH ME", you say "SESAME!"
Advertisement:

Play With Me Sesame is a Lighter and Softer (even more than usual) Spin-Off series based on Sesame Street. It was developed for Noggin, a channel co-owned by Sesame Workshop and Nickelodeon. Fittingly, the drawings on the show's backdrops are the same ones from Noggin's "Moose and Zee" interstitials.note These drawings were designed by Melinda Beck at the Nick Digital studio. Play with Me featured classic Sesame characters with their own segments: Ernie playing Ernie Says, computer games with Bert, Prairie Dawn's Art Class, and Move and Groove with Grover. As Grover, Prairie Dawn, Bert and Ernie are the hosts of the show, other Sesame Street characters are Demoted to Extra.

This show provides the example of: