I'll Tell You When I've Had Enough! 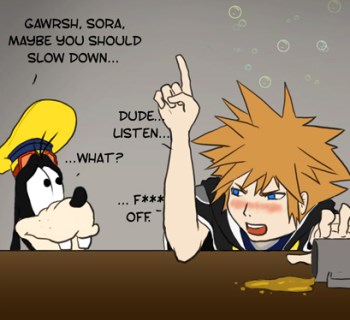 Image (part of a bigger picture)

Hey, I'll TELL you when I've described too many!

A character is having a lot to drink, induced by sorrow or otherwise, and The Bartender tries to gently get this character to stop. This character will then react angrily. Often, the bartender asks "Don't you think you've had enough?", and the character snaps "I'll tell you when I've had enough!", hence the name. The bartender may listen or comply with the demand.

Nowadays, it's almost a Discredited Trope due to having as many parodies, usually involving someone Drunk on Milk or drinking an absurdly small amount, as straight uses.

Also, even though people in Real Life are prone to do this, bartenders don't stop at asking. A bar can lose its license to serve alcohol by serving overly intoxicated customers in most jurisdictions, and the bartender may face legal repercussions, too. They will simply refuse to serve a seriously intoxicated customer any more alcohol, and if the customer makes a fuss, well, that's why bars have Bouncers. Less scrupulous bartenders may start diluting the drinks with cheaper, non-alcoholic juice while still charging full price, since someone that drunk won't be able to tell the difference.

Almost the mantra of The Alcoholic.

Contrast No More for Me.

"I think you've had enough for one day."

"I think you've had enough for one day."