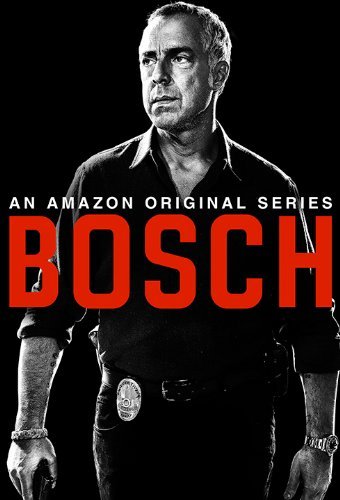 "I'm Detective Bosch. LAPD, Hollywood Division. This is the work I do."
Harry Bosch: I don't believe there's a better world than this one. I think this is the only one we got.
Advertisement:

Bosch is a Prime Video original series that was developed as part of the site's second batch of original programming. It is based on the novels of author Michael Connelly, and stars Titus Welliver as Connelly's most frequent protagonist, LAPD homicide detective Harry Bosch, a grizzled warnote Harry served in the First Gulf War and in Afghanistan and police veteran. Other stars include Jamie Hector as Bosch's partner Jerry Edgar, Amy Aquino as Lieutenant Grace Billets, Sarah Clarke as Bosch's ex-wife Eleanor Wish, Madison Lintz as his daughter Madeline, and Lance Reddick as Chief of Police Irvin Irving.

The pilot was released in 2014 while the series itself was released all at once in 2015. Like all Amazon originals, the decision to make a full series was based on a fan vote after the pilot was made available online.

In February 2020, Amazon announced the series would be ending after a seventh season in 2021, although the character of Bosch will continue in a spinoff show

. It was announced in 2021 that the show is called Bosch: Legacy, released on May 6, 2022 under Freevee, formerly known as IMDB TV.

Season 1 was released on February 13, 2015. It combined plot elements from Connelly novels City of Bones, The Concrete Blonde, and Echo Park. It opens with Bosch facing a wrongful death civil suit for a shooting in which he gunned down a Serial Killer known as The Dollmaker. While facing this administrative hearing that could damage his reputation, Bosch still finds the time to investigate a cold case involving the death of a small boy whose bones were found in the woods, as well as pursue Reynard Waits, a serial killer of gay prostitutes who has ties to Bosch's personal past. Annie Wersching plays beat cop Julia Brasher. Veronica Cartwright appears as the killer's foster mother.

Season 2 was released on March 11, 2016, and adapts plot threads from Connelly novels Trunk Music, The Last Coyote, and The Drop. In the second season, Harry is investigating the murder of Tony Allen, a pornographer who has ties to the Russian Mafia in Las Vegas. While this goes on, Deputy Chief Irving's son George is investigating a ring of dirty cops who turn out to have ties to Bosch's investigation. Jeri Ryan appears as one of the suspects, Tony's bitter ex-wife Veronica. Matthew Lillard plays Luke "Lucky" Rykov, a Vegas wise guy who also comes into Harry's view as a suspect.

Season 3 was released on April 21, 2017 and adapts plot threads from the novels A Darkness More Than Night and The Black Echo. Harry is the investigator and an important witness in the murder trial of Andrew Holland, a film director who allegedly strangled his girlfriend to death. The Holland prosecution is threatened when suspicion falls on Harry in the murder of one Edward Gunn, a wino whom Harry suspected years ago of being a Serial Killer. And while that's all going down, Harry is involved in the investigation of Billy Meadows, an Army Special Forces vet (like Harry) who's found shot to death in his RV. There's also a plot thread original to the series involving a serial killer stalking the Koreatown neighborhood. Arnold Vosloo plays an ex-cop now working for Holland on framing Harry Bosch.

Season 4 was released on April 13, 2018 and adapts major plot threads from Connelly novels Angels Flight and 9 Dragons and tie up some unresolved story arcs from the previous seasons (namely, the Koreatown Killer arc and Marjorie Lowe's murder). Harry is called in to investigate the murder of Howard Elias, a crusading attorney who at the time of his death was suing the LAPD for torturing a criminal suspect during an investigation. Meanwhile, his ex-wife Eleanor is worried about her current husband, Reggie, who has disappeared mysteriously in Hong Kong. And the Koreatown Killer is still on the loose.

Season 5 was released on April 19, 2019, and is based on the novel Two Kinds of Truth. Preston Borders, a man Bosch put away for the murder of aspiring actress Danielle Skyler back in the 1990s, is appealing his conviction. He has the support of the DA's office, because of a crucial piece of evidence: DNA found at the scene, tested 20 years later, matches to another man, a deceased serial rapist. Bosch hires former antagonist Honey Chandler to defend him against charges of misconduct. Meanwhile, a second plot line begins with a brutal murder in a pharmacy. This leads Bosch into an investigation of "pill mills" and organized crime trafficking of prescription opioids. Eventually, Bosch goes undercover to get the leaders of the ring. A third plot line original to the series has Jerry Edgar investigating the murder of one of his CIs.

Season 6 was released on April 16, 2020 and adapts plot threads from The Overlook and Dark Sacred Night. A medical physicist named Stanley Kent is murdered, but not before someone kidnapped his wife and forced him to withdraw a large quantity of highly radioactive cesium (used for medical research) from the hospital where he works. The LAPD and the FBI, joined in uneasy partnership, go hunting for the killers and the missing cesium. The second plot line has Bosch investigating a cold case, the 2009 murder of Daisy Clayton, daughter of Elizabeth Clayton, a drug addict that Bosch befriended during the pill mill investigation in Season 5. The third plot continues over from Season 5, as Jerry Edgar's investigation of the murder of his CI leads into a wider criminal conspiracy.

Season 7 was released on June 25, 2021. When an arson fire claims the lives of five people, including a pregnant mother and a ten year old girl, Bosch must risk everything to bring the culprits to justice despite opposition from the building's shady management, a local gang, a "female Stringer Bell," and other powerful forces. Meanwhile, Jerry deals with fallout from the events of season 6, and Maddie assists Honey Chandler on a high-profile case that carries its own risks. Although the idea of a fatal fire was loosely inspired by The Burning Room, this last season featured almost entirely original plot lines.