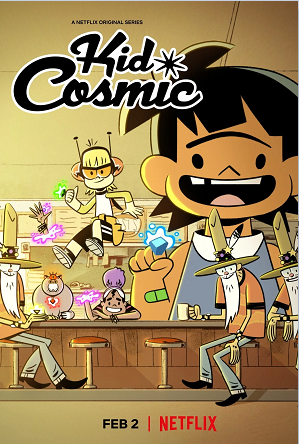 Have no fear, Kid Cosmic is here!note From left to right: Papa G, Tuna Sandwich, Kid Cosmic, Jo, Rosa, Papa G and Papa G.
"Kid may be a good guy... but he's really bad at it."
— Jo
Advertisement:

Kid Cosmic is the fourth animated series from the mind of Craig McCracken, co-developed with Lauren Faust and Francisco Angones, and features longtime collaborator Rob Renzetti serving as co-executive producer. Premiering on February 2nd, 2021 on Netflix, it is the first show by McCracken to fully utilize the Story Arc, a format he had previously toyed with in the second season of Wander over Yonder.

Set in a sleepy truckstop diner town in the middle of the desert, the titular Kid is an imaginative young comic book fan who dreams of becoming a superhero. One day, he gets his hands on five "cosmic stones of power" from another galaxy, which inspires him to round up some locals to form his own superhero team. It appears Kid's wildest dreams have come true...

...except he soon comes to learn that having super powers isn't quite as simple as it's cut out to be, and he and his friends' lack of experience proves to be a bit of a problem when it comes to tackling actual intergalactic threats, who plot to use the rings for their own nefarious purposes.

Have no fear, TV Tropes is here!: