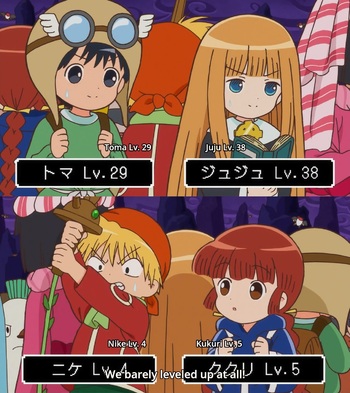 This is the final battle, by the way.
Advertisement:

The Low-Level Run is a variant of the Self-Imposed Challenge, and more specifically a variant of the Minimalist Run. The goal is to complete the game with your characters' levels as low as possible. The player does this by avoiding or fleeing as many Random Encounters as possible, reducing experience gain in any way possible, and still finding a way to beat every required enemy and win the game. The challenge can be expressed either by a specific character's level (usually the lowest level in your party) or by all characters' levels in aggregate.

Character Levels only really appear in RPGs and games with RPG Elements, so you can only do this in that kind of game. Even within that sphere, this challenge is just impossible in some games, but others are well-suited for it, particularly games where tactics or reaction time can outweigh raw power, as well as games where characters' stats can be raised to a competitive level without Level Grinding. Occasionally, staying at low level would actually provide you advantages.

Most Speedruns of RPGs are Low-Level Runs by necessity, since speedruns often require skipping parts of the game, which naturally means skipping many occasions to level up. Exceptions tend to go to the opposite extreme, using glitches to ridiculously overlevel the player characters.

Compare Minimalist Run, where the objective is to finish the game using as little equipment as possible. Compare Weak, but Skilled, which is what your character will need to be to get through the game with such comparably low stats and resources. Frequently overlaps with Pacifist Run in games that lack the ability to manipulate EXP gain.