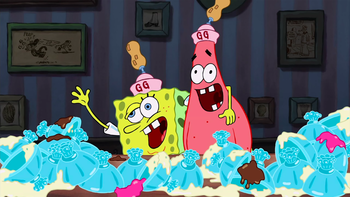 It's always "Sundae" at Goofy Goober's!
"Milk... It's miiiilk... Can you get tipsy from something like milk?!? Hic!"
— Gorman, The Legend of Zelda: Majora's Mask
Advertisement:

Wallowing in misery at a bar isn't exclusive to realist and noir works, even the Wide-Eyed Idealist in a Sugar Bowl can drown his sorrows... Thing is, though, he does it with milk, malts, root beer, soda or odder fare. Despite the beverage being non-alcoholic and in fact being loaded with sugar and stimulants, for some reason rather than make him hyper, the drink makes him act drunk and melancholy. In the case of aliens and other nonhumans, this would be a case of Alien Catnip, and could be the result of Bizarre Alien Biology.

A Sub-Trope of G-Rated Drug. Supertrope to Alien Catnip. Related to I Can't Believe It's Not Heroin!. Compare Heartbreak and Ice Cream. Can overlap with Lactose Over Liquor.

If the drinker has had a tiny amount of actual alcohol, it's Can't Hold His Liquor. If the drinker thinks that he's drinking real alcohol and getting drunk on the placebo effect, it's Fake High. Not to be confused with Frothy Mugs of Water, a type of censorship where words and imagery pertaining to alcohol are edited out.

"Is Cheese Addictive?" If so, what would it look like...?

"Is Cheese Addictive?" If so, what would it look like...?