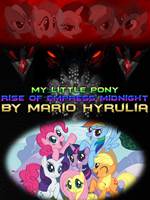 An dark alternate world of Equestria, all caused by one little event...
An alternate universe fanfiction of My Little Pony written by Mario Hyrulia.

It follows the Mane Six after a portal from an alternate dimension opens in their world and releases a powerful villain into their world. Upon reaching the alternate universe, they find themselves in a destroyed Equestria, with their only hope in saving their world is their alternates and the Resistance Against Empress Midnight. Twists and turns come as well as new characters in this full-on novel. Mario Hyrulia has also written multiple sub-stories to promote it.

Tropes found in the franchise