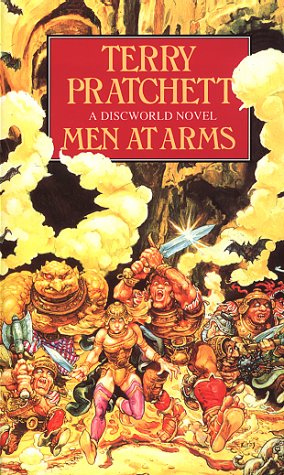 "Be a MAN in the City Watch! The City watch needs MEN!" But what it's got includes Corporal Carrot (technically a dwarf), Lance-constable Cuddy (really a dwarf), Lance-constable Detritus (a troll), Lance-constable Angua (a woman ... most of the time) and Corporal Nobbs (disqualified from the human race for shoving). And they need all the help they can get. Because there's evil in the air and murder afoot and something very nasty in the streets. It'd help if it could all be sorted out by noon, because that's when Captain Vimes is officially retiring, handing in his badge and getting married. And since this is Ankh-Morpork, noon promises to be not just high, but stinking.
Advertisement:

The 15th Discworld novel and the second in the City Watch theme after Guards! Guards!

Within the week, Sam Vimes will marry Lady Sybil and retire from the Watch. At the same time, the Watch has been forced to take on three new constables from ethnic minorities - Cuddy the dwarf, Detritus the troll, and Angua the w- (oman)? Meanwhile, a penniless noble and retired assassin, Edward d'Eath, spots Corporal Carrot around the city and deduces that he is the true heir to Ankh-Morpork's vacant throne. After failing to convince other nobles that they should work to restore the kingdom, d'Eath achieves full marks at the postgraduate course at the Assassins' Guild and finds a reference to a certain banned weapon...

Notable for setting up the Watch status quo that forms the setting for many future books.

Preceded by Lords and Ladies, followed by Soul Music. Preceded in the Watch series by Guards! Guards!, followed by Feet of Clay.