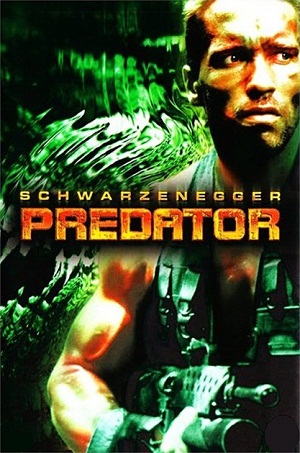 Major Alan "Dutch" Schaeffer (Arnold Schwarzenegger) and his elite mercenary "rescue" squad are sent to retrieve a cabinet minister held hostage in a Banana Republic during the late years of the Cold War. After slaughtering a group of guerillas, they discover the hostages are actually CIA agents and their employers have lied to them. But all of that takes a back seat once a mysterious, invisible enemy with weapons not of this Earth starts killing off Dutch's team one by one...

This film was a successful piece of action cinema because of its groundbreaking special effects, big-budget action sequences, and unique premise. Considered the manliest movie ever made, it's hard to argue the point: Arnold Schwarzenegger, Carl Weathers and Jesse Ventura had major roles in the film, and were all very big, strong guys who were prone to bleed and sweat (though one of 'em in particular ain't got time to bleed). On the other hand, the emphasis on big, sweaty men being macho with each other in the jungle makes it one of the most Ho Yay films of all time, perhaps second only to Schwarzenegger's own Commando. Again, though, the manliness also doubles as Genre Deconstruction, because it all vanishes in an instant when the soldiers are no longer the top predators.

Predator ain't got time for tropes: