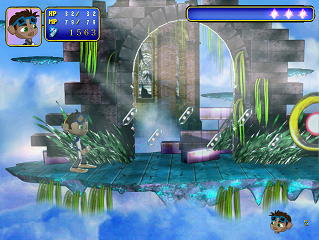 Punch Punch Ha!
Galaxia Chronicles is a side-scrolling Platform Game developed by Renato Depaoli under the company name eiVix. It was released in 2010 for the PC, and a demo is available on their web site

The game follows the story of Maxx, an orphan boy who grew up in Rio de Janeiro and never knew his parents. He experiences a strange dream after falling unconscious on a beach, and before he can return home, he is abducted by aliens known as The Greys and taken to Galaxia, the birthplace of the universe. Before they can tell him why, though, their UFO is gunned down and pushed into a minefield by the Siris, a race of Mechanical Lifeforms. As their ship falls apart, they help Maxx into an escape pod and send him soaring towards the moons of Galaxia.

From here, Maxx must travel across four of the eight moons - Fioni, Oceoni, Ceoni, and Geloni - in order to unlock the Seal Crystals, discover who he really is, and defeat the Siris, all while a mysterious prophet in black robes guides him along the way. Many of the game's events are revealed through animated CG cutscenes, and the graphics as a whole are one of its major selling points.

The game contains RPG Elements. Collecting crystals will allow Maxx to level up, gain more HP and cause more damage to enemies. At certain levels, the range of Maxx's melee attacks will increase along with their color, and he also unlocks magical abilities that can be used through a menu.

Be careful, though, for HE is watching your every move...